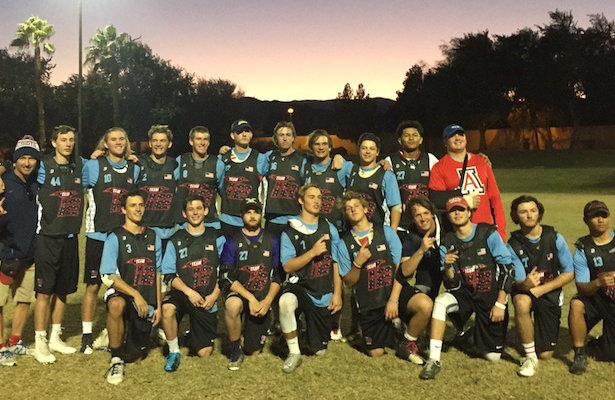 Team 12 edged Crush 4-3 to win the Elite Division championship  at the Palm Desert Lacrosse Classic.  Following a 9-0 loss to Team 12 in the tournament opener, Crush regrouped and marched through the rest of the tournament undefeated to set up the rematch in the championship game.

In a back and forth game featuring championship-caliber play from both teams, the difference turned out to be a Nicholas Demaio goal assisted by big brother Anthony Demaio.  With about three minutes to play and the game tied 3-3,  Nicholas got open behind the defense and finished a perfect pass from Anthony to score the game winner.  The Demaios play for Coronado High School and are committed to Boston University.

The Crush were led defensively by George and Kosta Dalis, Tanner Boston, and Chris Reem.  Ryan Blank stood out between the pipes and made a number of difficult saves against the high-powered Team 12 offense.  Nathan Skeen, Matt Harris, and Ellis Geis scored the Crush goals.

Team 12 Coach Tom Demaio said of his team’s performance “Amazingly talented team who was very unselfish , a trademark of this group over the years. Crush is always good and plays hard. Coach Fox threw a tough zone defense at us and it was Great to see the players work through it and find ways to score. “