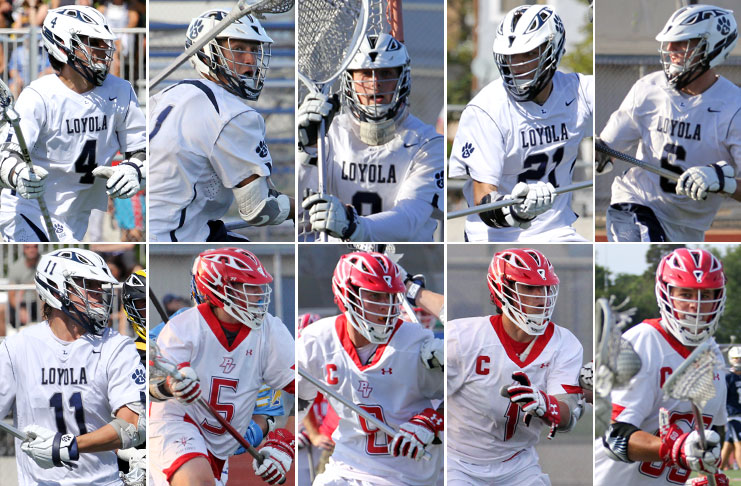 From Loyola, goalie Joe Theuer earned All-American honors for the third consecutive season, becoming only the second three-time All-American selection from the LA area. Thacher defender J.J. Tshaykolo was named All-American in 2011, 2012 and 2013. Joining Theuer as a repeat selection was midfielder Jonathan Partamian.

Senior LSM Scott Phillips of Peninsula, senior attack Cory Lund of El Segundo and junior attack Paul Rodriguez of Harvard Westlake were the only non-Loyola or Palos Verdes players selected as All-Americans. Both Phillips and Lund were All-Academic as juniors last season.

Rodriguez was one of only two juniors named All-American this season, along with Palos Verdes attack Jack Collins.

Loyola head coach Seth Cohen was named Coach of the Year for the second year in a row, and Palos Verdes junior LSM Josh Park was recipient of the Bob Scott Award — given to a “player [who] exemplifies the fundamentals of lacrosse, works hard to improve his game and is a leader both on and off the field” — while also being named All-Academic.

Ten players earned All-Academic honors from US Lacrosse, including repeat honoree Adam Enomoto of Mira Costa. Park and midfielder Liam Miller of Loyola were the only juniors on the All-Academic list.