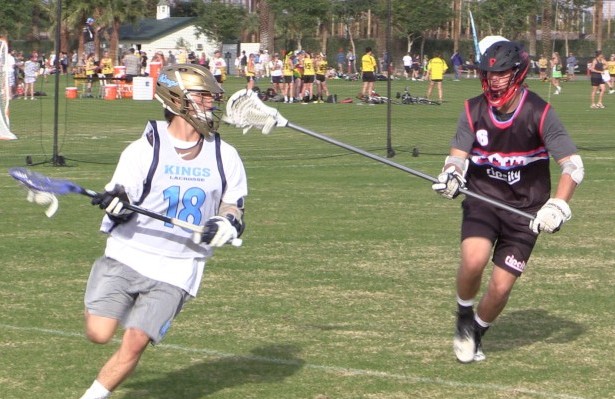 A total of 19 Elite teams from all over the west coast entered this year’s Sandstorm Tournament, and when all was said in done, two Orange County  teams, Kings Lax Gold and Rip City Elite  were left standing in the championship game.   With both teams featuring some of the top talent in the OC, the fans were treated to one of the best games of the weekend.

In a game of runs, Kings Lax Gold opened up the scoring with a beautiful time and space shot from their reliable attackman Nino Chavez (Corona del Mar High School).   Jason Simaan (CdM) won the won the ensuing faceoff  to allow the Kings were able to grind out another long possession with several well placed shots as the Kings tried to run away with the game early.  Despite their best efforts, the Kings could not get the ball past Rip City goalie Austin Boyer (San Clemente High School) who was standing on his head in the cage, with what seemed like countless highlight reel saves in the first few minutes of the game.

Eventually the offensive pressure became too much for even Boyer, a strong overhand jump shot from Nate Neumann (CdM) gave the Kings a 2-0 lead.  Another faceoff win by Simaan gave the Kings the ball once again, but a door step save from Boyer created just the opportunity Rip City was waiting for.  Pouncing on the groundball, defenseman Nick Georgagi  (JSerra Catholic High School) quickly moved the ball up the field to high school teammate, Logan Olmsted (J Serra), who dished the ball off to ready and waiting attackman Jack Renard (San Clemente) for to cut the lead to 2-1.

After their first faceoff win,  the tides turned for Rip City, and an extended possession led to the crafty footwork of Jonah Rinaldi (Aliso Niguel High School), tying the game at 2-2.

The Kings came right back with more big saves from Boyer kept the game level, and allowed Rip City to steal the lead after a deadly side arm rip from Bradley Simoncelli (Palo Verde High School) put Rip City up 3-2 with time running out in the first half.  The Kings are no strangers to adversity, and they knew what needed to be done. Another faceoff win by Simaan, set the Kings up  wfor the final possession of the half.    Another long offensive possession led to a skip pass from Stephen Von Der Ahe (CdM) to Neumann standing all alone at 12 yards.  A devastating bounce shot gave Boyer no chance to make a save, and tied the game at 3-3 the game going into the half.

After starting off the second half man down but with possession of the ball Rip City was able to kill the penalty, and began working their offense against the stout Kings defense.   After, several drives to the cage, Rip City earned a man up opportunity, and Simoncelli immediately capitalized on a feed from X by Rinaldi.

With the momentum now in Rip City’s favor, it seemed like Rip City might pull away after winning the next faceoff, but several key saves by Hoyt Crance (CdM,) kept the score at 4-3 going into the final minutes of the game.  After collecting a contested ground ball and clearing the ball all on his own,  Sherwin Gersten (CdM) tied the score with a strong drive down the right hand alley.

All tied up at with only minutes left both teams had several opportunities to take the lead, but the no one could guess who would score the game winner.  After another successful defensive stand for the Kings Notre Dame commit Hugh Crance (CdM) cleared the ball up the field, and was able to find his way to the goal finishing with a sidearm topshelf rip.  With just over three minutes left Simaan dug deep to win the next faceoff for Kings Lax Gold who was then able to control possession for the remainder of the game, and claim their second Sandstorm title in two years.