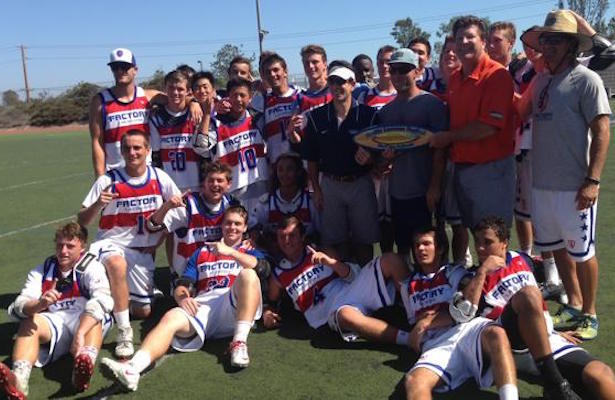 Factory Lacrosse (pictured above), the defending champions of the High School Elite Division, are among the more than 150 boys’ and girls’ lacrosse teams from throughout the Western United States that have invaded San Diego this weekend for the sixth annual Pacific Lacrosse Festival.  The PLF, which features a Round Robin Division and a Best in the West Tournament Division, has become one of the more popular events on the summer tournament circuit and draws up to 8,000 lacrosse enthusiasts from Washington, Utah, Texas, Nevada, Colorado, Texas, Idaho, and California.

The games, which begin today and continue through Sunday, will be played at Rancho Bernardo High School, Del Norte High Schoo, and Black Mountain High School.  The Round Robin division teams play five games with no champion determined. In addition, the PLF will feature boys’ U13, U15, and Elite Tournament divisions as well as girls U15 and Elite Tournament Divisions.  The Tournament Division teams play a minimum of five games with the top two teams in each division playing in a championship game.

Check back with MaxLaxOC.com throughout the weekend to keep up with the action.