Dawson and Valor Advance to Semi-Finals

Dawson Mustangs and Valor Eagles easily moved into the semifinals on Friday.  The Mustangs trounced St Mary’s 21-6 with a 10 goal outburst in the 2nd quarter and 6 goals from Wyatt Watts.  Valor handled Golden defeating them 13-4.  #3 Conifer has their hands full with #6 Air Academy from the beginning and couldn’t pull it out in the end.  The Kadets took an 8-2 lead into halftime and never looked back ending the Lobos title dreams.  There was a mild upset in the other quarter final game where #5 Cheyenne Mountain moved on by beating #4 Windsor 12-7.

The semifinals should provide some enticing lacrosse.  Both games are rematches from earlier in the season and both were close contests.  Dawson will have their hands full trying to stop Cheyenne Mountain’s leading scorer August Johnson.  On the other hand Cheyenne Mountain has a tough task slowing down Dawson’s vaunted offense that averages 17 goals per game.  The Mustangs offense is lead by Gavin Pure, 120 points, Jesse Rosenblatt 82 points, Hunter Watts 52 points, and Wyatt Watts 73 points.  It looks like Indians will have to pick their poison.  Valor will meet Air Academy in the other semi final matchup.  The Kadets will try to avenge an earlier loss that Valor won in the closing minutes.  Air Academy will have to find an answer for Eric Pacheco who has been very good at the face off x winning over 67%.  The Kadets Jake Thornally with his 102 points this season will lead the offensive attack against Valor on Wednesday.  Look forward to some well played lacrosse games leading up to the finals on Friday at Sports Authority at Mile High. 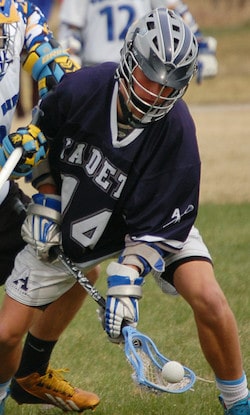